We caught our first swarm of bees in our first year of beekeeping – it happened to be from one of our own hives.  The bees were in a cardboard box.  Were we totally prepared?  Not really.

What do you do after catching a swarm of bees? Shake the bees and queen from the capture box into a hive box with several frames removed. Gently add more frames, so as not to crush the bees. Close the hive, letting the bees settle in. Feed for a few days. If the frames have no comb or honey stores, feed the bees for several weeks until comb is drawn and the bees are building honey and pollen stores.

Of course, there’s more to know about bee swarms and what happens after catching one.  Read on to find out more.

Did You Get The Queen?

If you’re still at the swarm site, the first question to ask yourself is whether or not you caught the queen.

If the swarm is in a nice compact ball and relatively quiet, and you managed to get it into the box the same way, chances are the queen is there, too.

If you’re uncertain if the queen is there, or if there are a lot of bees flying around, put a queen excluder over the top of the box and watch to see what the bees do. The queen won’t be able to get through the excluder, but the worker bees can.

If the queen isn’t there, look around to see if she dropped on the ground nearby and check to see where the bees are congregating.  You may have to recapture the swarm.

If you caught a swarm without a queen, all is not lost.  You can combine the swarm bees with a weaker colony in your apiary, making it a more robust hive.

Caught A Swarm, Now What?

Now that you’ve caught a swarm, you probably have it in a box of some sort.

It’s ideal to set a swarm into a nuc box or a deep that has a couple of frames in it, preferalbly with some drawn comb qnd with some honey stores.

When you get to your apiary, put the bees into their new home.  If they are on a branch, put it into the hive.  If the bees are in a box, carefully pour them into their new hive.  Or shake them gently.  Or scoop them into it.  The best way to do it is whatever way you can get the most bees inside the hive without disturbing them any more than necessary.  If they’re disturbed, they will fly.

Then set the mostly empty box near the hive entrance.

As the bees spread out into the hive, add frames until the box has the full number.  If you have them, add some frames with drawn comb and some honey.

Our first swarm got a bona fide deep with frames, but we had to use scrap pieces of OSB for the top and bottom.  The bottom was shimmed so the bees could enter – or leave!  As the bees settled inside the hive, groups of five or six bees set themselves up on the sides and the front of the box, raised their abdomens, and fanned their wings, sending out a message to bees that this is where the queen is, this is home.  By dusk, there wasn’t a single bee on the outside of the hive.  All who could were inside.

That night we left them alone and did nothing more.

As for checking on them, we might inspect the hive in a day or two to check for the queen.  After that, we usually inspect every week or two.

It is possible that the bees may not like the hive you have selected for them.  This hasn’t happened to the local beekeepers we talk with nor to us.  It has happened for some people.

Feeding A New Swarm Of Bees

Bees in the wild fend for themselves.  Our goal is to make sure our bee colonies survive, so feeding a new swarm of bees can help them along.

The workers in a swarm are carrying some stores of honey and are ready to draw comb, but comb building from scratch takes a lot of work and a lot of food. The standard bee lore that is passed around is that for bees to make one pound of wax, they need to eat 8 pounds of honey.

In case you’re interested, those numbers are based on two studies.  One was done in 1814 by F. Huber and one in 1946 by W. Whitcomb Jr.  I haven’t read either one. I just assume that the bees need a lot of food to keep them going while they are building.

We feed the bees 1:1 sugar syrup.  That means that the syrup is made with one pound of sugar to one pint (2 cups) of water.  Many people cook this but our mentor said that two minutes in our Vitamix on high will work just as well.

We use a top feeder, which is easy to access, easy to check and easy to fill without disturbing the bees. There are several other types of feeders. We avoid using the ones that attach to the front of a hive on the belief that it might encourage robbing by other bees.  That’s just third-hand information passed around our bee club.  If it’s dry out, we will use Boardman feeders for water.

How long to feed the bees?  When installing a package of bees into a hive with new foundation, we feed until comb is drawn and the queen is happily laying.  This can take several weeks.  Check your bees weekly to see what is happening in the hive.  Don’t underfeed them.

What Time of Year Do Bees Swarm?

There is an old rhyme, an English proverb, about bee swarms.

The gist of this jingle is that a swarm caught early in the season will build comb, have brood, and be fully functioning and foraging soon enough to produce extra honey that the beekeeper can take from the hive.

Our girls have swarmed in late June and early July, and so far, we have managed to recapture them.  No, they made very little to no honey, so from that standpoint, they weren’t “worth a fly”.  On the positive side, they have had good sized colonies and good honey stores to go into the winter. We think of them as free bees.

A swarm caught later in the year barely has enough time to establish its own winter stores of honey.  It generally won’t have much, if any, extra for the beekeeper.

Do bees swarm in the fall?  They can. There will be a very short foraging season for nectar and pollen for these girls to set up a new hive with. If you catch a fall swarm, be prepared to feed them continuously if you want the colony to make it through the winter.

What Time Of Day Do Bees Swarm?

We live in the moderately cool Pacific Northwest. Here swarms generally occur in the afternoon, and usually between 1 PM and 4 PM.  Isn’t that precise?  My guess is that early afternoon here is the warmest part of the day in springtime and early summer.

Areas of the country that have hotter weather than ours may find that swarms happen earlier in the day.

Don’t confuse swarming with orientation. During orientation, brand new forager bees hover in a group close in front of the hive and then fly off.  They face the hive while doing this.  These bees are learning where their hive is in relation to the sun and surroundings so they can return from foraging flights. This usually happens in the afternoon.

Swarming bees leave the hive quickly in large numbers, and the sky is filled with thousands of bees.

How many bees are in a swarm?

Please use common sense when reading the next few sentences.

The answer to this is for honey bees, not for Africanized “killer” bees.

Bees in a swarm are probably the calmest, most gentle bees you will encounter.

They are on a mission to find a new home with their queen.  They aren’t defending the hive.

You can stand in the midst of the bees as they fly toward the place where they are going to cluster while scouts search out a new location. The noise will be loud but it is doubtful that they will even land on you. They are pre-occupied. I prefer being off to the side; I want no random bees stuck in my hair. You can stand near the cluster of bees and they will pay no attention to you. Usually this is the case, but, once again, use common sense if you encounter a swarm of bees.

A swarm leaves the hive and arrives at a place where the bees form a ball.  Scouts are sent out. If they find a good location, the swarm will move there.  If not, the bees may move one or several times while searching for the right new home.  If you install the swarm in a hive that, for some reason they don’t like, they may swarm once again, looking for a new location.

Why does a beehive swarm?  The act of bees swarming and beginning new colonies is a way for the species to increase its population. The most common reason is that bees will leave a hive and swarm is that the bees feel crowded in their existing space and need more room to expand. 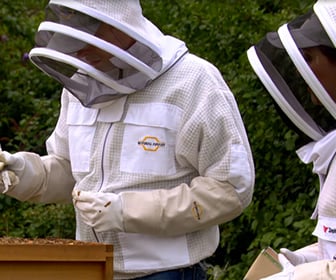